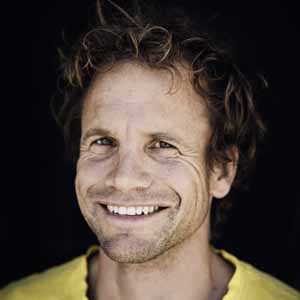 52 times through the north face of the Eiger on 22 different routes: the Swiss thoroughbred mountaineer is unlikely to be able to imitate this in a hurry. But the “caretaker” of the Eiger north face, as one of the world’s best all-rounders, has also made many famous ascents around the world. These include red point ascent in Yosemite Valley, the ascent of all three peaks of the Torre massif in Patagonia (Cerro Torre, Egger and Standardt) with an almost complete repetition of the “free” Compressor route on Cerro Torre (up to 1 pitch red point) and a new route at the Arwa Spire (6193 m) in the Himalayas (M5, 7a) and many, many others …

Roger’s typical mindfulness is reflected in his environmentally conscious approach to climbing. His “smart bolt” initiative aims to preserve the natural and historical characteristics of routes.

Beyond mountaineering, he supported children in townships in South Africa with his aid project “Roger for Africa”.